I  re-joined Instagram last year  and posted a countdown to Christmas, a digital advent calendar. So I thought I would do a repeat performance this year.  I was going to try to do an original piece of art for each day but I failed on the first day. The simple felt angel expanded into a piece that was at least 3 times bigger, sparkling with sequins, lace  and  beads. In my mind’s eye, I would have liked to have made it huge but in practice, a lap size was achievable. The 2nd piece was simpler but just as big. I did find out that my ability with the sewing machine was seriously lacking with not a single  non wiggling line.  With the third and last piece, I just went overboard with the sequins, beads and collage. In my head, I saw a Christmas tree competing with the stars of the Universe as I remembered my feelings from childhood. Again I would love to have made it HUGE but even this size took several days to complete. The Christmas tree and the Angels WERE Christmas to me plus the nativity scene at the school play. I always wanted to be an angel but alas it was never to be. I was going to do a nativity scene but failed miserably but I know what I want to achieve so maybe that will be big one next year!  Below are the pictures I posted each day. It was surprisingly hard to post every day.

In the end, December wasn’t as productive as I would have like it. October and November flew by in haze of non activity or nearly. I managed to attend 4 paint out events and 1 open competition in San Angelo. I wasn’t planning to paint at San Angelo as I am not really in the competitions as I know I am unlikely to win anything. I realised quite late in life that one of the reasons I fail to do a lot of things is because I hate being a loser. I know you should just enjoy joining in but doesn’t help with the disappointment as you are passed over again 😦  I will do it again next year. 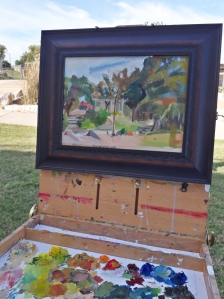 There was an entry submitted competition which lasted a week and an open quick draw competition on the closing Saturday for other artists.  It was really interesting to see the work of the accepted artists and the quick draw contestants which made me realise how far I have to go with plein air painting. The only issue I had with the competition is that it was judged by one artist, rather than a panel.  Also after a morning of painting the lure of cooked food was torture as it was only for the accepted competition artists, not us lowly plebs (we had paid $10, so it not as if we just turned up). We had to wait for the lone judge to make up his mind before we could eat, so it was the middle of the afternoon before we ate. I was starving!

Apart from my Advent project and the plein air I haven’t really done much. I had started a still life  (which I mentioned in my last post) but quickly abandoned it.  Currently I am working on and hoping to complete the following still life painting  I found the hand-made rag doll in a junk shop in San Angelo.

This will be the last painting for a while as I decided to sign up for an online embroidery course organised by The Embroiderers’ Guild UK.  I am going to start with the beginners course as although I have embroidered and beaded for several years, I am basically working in the dark as I do it (much as I am with painting to be honest, not a lot of teaching done in college in the late 70’s). I thought going through a structured course I might be able to extend my range to fuller extend. Life is a little distracting at home at the moment but come 6th Jan, my time is pretty much going to be  working full-time in this new direction.

I also got 2 books from Gordon this Christmas which I might work through as it should complement the embroidery course.

Well this is my last post of this year.  I hope I will be more frequent next year with regular updates on my progress on the new course.

This is not going to be long post as basically I have not done much in the 2 month since I last wrote – exactly 2 months wow!

There is a paint out today in Austin but there is no way I am facing rush hour traffic plus my allergies have been really bad recently. However, apart from the allergies problem, which has plaguing me about 4 weeks now, I seem to have entered one of my depression periods where nothing interests me.

So I am glad we have these paint outs as I generally push myself to go along even I don’t feel that creative. I also try to find other ways to work my way through these periods as I recognise they are part of my life and they are not going away. This time I have rediscovered crocheting and I am currently on block 18 of a 63 block blanket. I am also still attending the lace making group even though I have not really laced for weeks,  as one of my issues is a total lack of social interaction. Nothing like being on your own 15 hrs of a day to feed this introspection/depression.

It might never get finished (I have tried it before and got to 9 squares) as I am also working getting out of this inaction. I am again trying mediation and I  am already feeling more positive.  I am also rereading  Hans Christian Andersen fairy tales and stories. Its a massive book! I don’t plan to actually depict any of the stories but when I was training as art therapist, I had a series of children’s story tapes which I used to get clients to describe by drawing or painting how the story affected them.I didn’t want a literal interpretation of the story.

I am also sort of working on a still life painting except I haven’t worked on it for a few weeks which probably indicates that I should reconsider or start over with a different set up.

Depression is a routine part of my life but I don’t want to be painting about it!  So hopefully the light begins to rise above the dark soon.