When I was kid, the headteacher at my primary school, described me to my mum as a plodder. Not a flattering term but probably quite accurate. 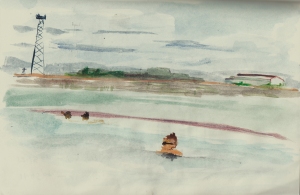 Notes:Sketch #19 9/02/2015 2.36pm 88f felt like 90f  31c feels like 32c Pflugerville lake beach area  Nice breeze in the air 10 mph. Intended to sketch somewhere else but I missed the exit on the free-way. Then I decided I would to go to the trail at the Travis County sport fields . It is being rebuilt and redesigned!  So last resort here. Sun is strong despite lots of clouds and reflecting off the water- too strong really  to give any real tonal difference to features.  So here goes 2.42 pm

So that sketching session didn’t really go so well. The guy just sat and chatted for 30 mins before taking himself off to cool down in the water. He makes an appearance in my sketch 🙂  Then just after that a family arrived with cool boxes and chairs, sitting on the small wall beside the bench where I was seated. It was very obvious they wanted me to leave without actually saying anything. So I made a quick exit and sure enough before I was even 10 yds from the bench, they were already sitting there. Don’t blame them as there are only 2 covered shaded areas on the small beach. There is no shade elsewhere at the lake as its basically a man made reservoir  which has lots of immature trees dotted around. In 10 yrs it might be better. 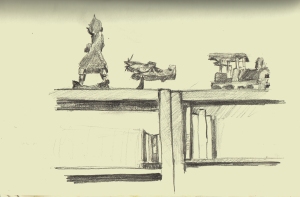 12.15pm – my scratching is obviously messing with Gordon’s sleep as he is restless, so time to stop.

So I didn’t sketch on 3rd as I had a really good night sleep and it put me in the mood to do some actual housework (a very rare event)  Then just as I was thinking I might go out, my daughter rang to ask if I could pick up my grand-daughter from daycare as she was running late.  Much prefer playing with my grand-daughter than sketching, she brings me so much fun in my life.

Yesterday, I had the opposite of the day before, a poor night sleep.  Despite that, I did my 5k training but it left me cranky all day and not in the mood to do anything that involved going out into the heat again. Even at 9 am it was hot and humid and by the pm the heat index was nearly a 100f.  I fully intended to sketch indoors but only felt like to doing it as I was going to bed. I love how my bedroom is full of interesting shapes and shadows when we put on our reading lights. So after I had read for 30 mins, I finished off the day with 30 mins of sketching. Unfortunately it didn’t help me get off to sleep.

9.50 am sometimes you have to admit things are not going right and admit defeat!  started in watercolour (useless) and end with the aqua pencils.  The paper is not robust enough for that and started to disintergrate. Must remember to bring watercolour paper next time as I might have been able to resolve it with the pencils if I had stronger paper.

So this morning wasn’t so great but hey, not everything is going to work out.  I really don’t like watercolours. Its weird because most beginner painters start off in water colour before they move on to acrylics or oils, In fact most people seem to think acrylics are really difficult to use whereas I love acrylics, always have done. Such a versatile medium. I will get over my phobia about watercolour in the course of time, I am determine of that.

For the  last few months I have just used  my scanner to scan my sketches, I have discovered it better to use the Photoshop elements 11 program I have to scan the images.  Give a much truer colour of my sketch book.  Now I am going to insert glassine paper inbetween the sheets of my sketch book as I have noticed that the pencil is rubbing off on to the opposite page. I don’t really like using fixative so I am going to try the glassine paper I have.