So much is going on  the house at the moment, I decided that as I want to return to painting as my focus, I need some space and time to do it. Not going to rent a studio when I have ample room in my house so the next best option was to do an art class at the Austin Contemporary at Laguna Gloria.

Although I have been working in acrylics for all of my art life (allergic to oils) I really don’t know that much about the mediums that are available to artists now. I was hoping this class might have helped in that area but so far I have been disappointed as we have only used techniques I was already aware of. However I am enjoying the actual act of painting which is the main point.  I might sign up with the next class as apparently that is the advanced class.

The first week the instructor (Linda Montignani) demonstrated the different applications of acrylic paint and why it is the most versatile of mediums. She also show us a few mediums and gels available  to extend that versatility. She then show us how blotting, using shapes, salt and mineral spirits could affect the  surface of the paint.  We were then instructed to cover our chosen painting surface with paint and use a few of the techniques described above. Once we had done that and while we were waiting for the paint to dry, she show us how to use drawing ink and straws. Back to the paintings in progress.  The last part of the exercise was to make our random actions into something.

I must admit I was a little stumped at this point and it was a bit like doing an art therapy exercise. However, below is what evolve. Looking at it later, I realise it kind of encompassed my art work over the last 35+ yrs, harking back to my interest in graffiti on walls and children’s art while I was in college and then right up to the mixed media project I did for the Sketchbook project. 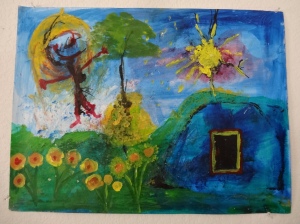 So last night was the 2nd class and I must admit I was not happy on entering the class to see a very elaborate still life set up in the middle of the room.  I love modern still painting but still not a fan of doing them myself, even though that has been my main output for the last few years. Mainly I think it because I have no idea how to approach it in the free and easy way I see a lot of UK artists do this kind of subject 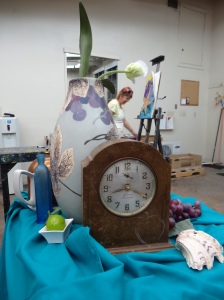 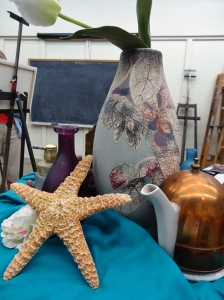 So the beginning of the class started with us trying to peer over the shoulder of Linda to see the minute screen of her apple laptop to see examples of the type of work we would be doing in the class. I didn’t even bother to look as the glare off the screen meant I couldn’t see anything and the screen was so small, even if I had been able to see something, it wouldn’t have really shown the pastel and charcoal techniques she was going to demonstrate.

So after about 15 minutes of the others peering over her shoulder, Linda then demonstrated to the class how to abstract from the still life in front of us, using a charcoal drawing as a base and how that would blend into the acrylics.  Once we had worked on that part of the technique, she should us how pastels could be worked into the painting.

Neither techniques were new to me  but I eventually got to enjoy the actual painting part of the class. Maybe that is the reason why I didn’t hear a very important instruction as I switched off. Naughty girl!

I had stop at one point because the classical music on the radio was driving me nuts. It wasn’t particularly loud but the rhythm was fairly fast. When you are trying to concentrate on painting, you don’t particular want  your brain racing along with the music!  So I went outside for a while, calmed down and asked for the sound to be lowered. Linda was very accommodating about this and even said the station could be changed but lowering it so it was barely heard was enough. Next week I will follow the example of another of the students and bring in my MP3 player.

As to the actual painting, I was fairly pleased with the way it came out, given that I started on the wrong foot. At Camberwell, we didn’t really do that much in the way of still life but if we did, it was staged towards a wall with no distractions from the setup and the class would cluster around in a semi-circle. This was set in the middle of the room with lots of other distractions.

In the end it worked out well for me as my view was now completely over the place and not much related to the background. It actually made me much freer with my work than I am typically. It still had the tendency to tighten up if I looked too closely but the music annoying me helped in that regard. As I felt myself getting angry with the music and probably with the painting I stopped and walked away from it.  Anyway below is the image I produced.

Next week we are doing self portraits with charcoal, pastels, wax crayons and drawing ink. That should be fun  😀

I am mixed media artist who explores painting, embroidery, bead embroidery and quilting. View all posts by Jacqui