and looking back  there haven’t been many this year! 5 in total and in most I am moaning 😦

So that last month or so I have fallen into more a slump than normal after the terrible mixed media class . So no more classes!  It was also unusually cold at the end of November and beginning of Dec. I only have blinds in the studio, so it was bit cold so in effort to keep the cold out I put up some temporary covers but that only made the studio even more uninviting.

I have been doing some creative stuff but not in the painting sphere, making a couple of gifts for Christmas.  Below is a painting I have been playing with for a few weeks. In a fit of ‘I’m going to paint’ I order some sample acrylic grounds. I had an old painting hanging on my wall which I had done in conjunction with my bead Calendar project. 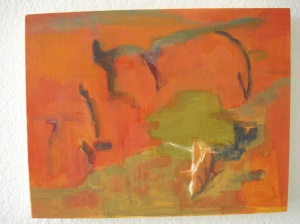 As you can see it was barely a painting  (darker more red-orange in real life) so not something I felt particularly precious about. I began by looking at the original calendar photo it was based on, some rocky landscape in Australia.  I decided to use the crackle medium.  So I pasted it on with a large brush everywhere but the tree.  It barely worked, so I put on more with a palette knife. Not much difference to be honest and I put on about another couple of layers but it really didn’t work. Very disappointed.

So I had to work with what I had which wasn’t much and as it was experiment, I wasn’t too concerned if nothing worked. So having used soft pastels on the last painting, I decided to go in that direction.  I don’t think it really improved the image much but it did reaffirm that I enjoyed working with soft pastels.

Again the colour is quite right, more orangey red that this image.  However comparing images here, I can definitely see more depth and obviously more textured in this painting.

So the new year starts in 2 days (or less) and my work shift changes on 6th Jan.  I am hoping to work more outside, especially as the weather is perfect at this time of year (bit cool for us Texans but not cold for us Brits!) Only fly in this  picture is there is good chance I will be babysitting my grand-daughter during the day from the middle of Jan. It might be only for a couple of hours or it might be a few days. (to honest, looking after Juniper will be a joy and I would give up painting any day, to be with her).  I should have at least one day a week to go out into the Hill Country and get to grips with this landscape I have lived with for the last 13 yrs. Also as a Christmas gift I got a box of Landscape Mungyo Soft Pastels. They are not the ones I wanted but they are better than the ones I have now. 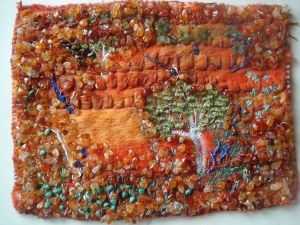 Above is the bead page I made for the bead journal project I was involved at the  time.

Whilst I am not painting, I am reading about artists, mostly painters and one in particular at the moment, Vincent Van Gogh. You get so complacent about some artists as they reprinted so much and you really don’t know that much about the actual artist and how they got to where they achieved their break through moment.  The book I am reading is very long, dense and I don’t think they particularly like the artist that much, well the person, not the work.   I did not know that Van Gogh started his artist career so late and how brief a period it was.  I was surprised in who he thought was the best artist and whose work he aspired to.  I did not know that Gauguin was basically bribed to move to Arles and how brief a time it was. As it has taken me several months of reading the book, I suspect it might be a while before I get to the tragic conclusion.

As this book is a bit of mammoth, I have been dipping into several other books I already have and need to rediscover. I also bought a new book this weekend called ‘What are looking at? the surprising, shocking and sometimes strange story of 150 yrs of modern art. by Will Gompertz.   So far I have read the first chapter and the influence of Marcel Duchamp’s ready-mades, in particular  the ‘Fountain’ Its a pretty light read compared to the Van Gogh book and makes no pretense its an art history tome.  I think I might actually finish it before the Van Gogh book!

Last 20 mins before I went on a walk in the dark, I tried my hand at some drawing.Too hot to walk during the day. I am a tad rusty 🤣😂 Wasted an afternoon looking up a great uncle who I didn't know existed until a few months ago. My Nan insisted she was an only child from a wealthy family who disowned her. #familysecrets #drawingsketch
Slowly making progress. Using Mistyfuse is great as I can pull apart and reposition the fabric as I change my mind. Hopefully tomorrow I finish this part and the start the quilting. Approx 27 x 18". #mistyfuse #batiks #experimental #artquilt
A start #artquilt #batik #experimental Still need to kill that anxiety devil 👿
The beginning s of a new fused art quilt. Time to get back to taking risks and stop dithering. Anxiety is a devil 👿 that consumes me too much! #abeginning #inspirationwillcome #artquilt
I have been doodling with the Westalee templates. I started with the London flying squares using the diagram on the pamphlet that came with the ruler. Not great at figuring out diagrams especially with no written instructions 🤪Then I expanded it with a few other templates from the starter pack. Not a great design but taught me how valuable the spacing gauge is. #westaleetemplates #westaleelondonflyingsquare #westaleesamplerset1 #westaleesimplecircle #spinefex4 #4"arc #spinwheel36 #doodle #crayolasupertips
Most of today I tidied up my stations on the art room and then I set out to explore the new rulers I got last week. The mini crosshair templates are perfect😊. I think I will have a lot of fun with the snowflake rulers. #westerleerulers #westaleetemplates #snowflaketemplates #snowflakerulers #drawing #minicrosshairtemplate #crosshairtemplate
Loading Comments...
%d bloggers like this: