So this week was broken up into 3 parts.

We began by mixing up paint with an acrylic medium ( regular gel gloss with water) GAC medium 500 if we had it  or matte medium. Once the colour was mixed and the right consistency we poured it on to freezer paper or in my case, palette paper.  We will use them next week as acrylic skins.

We then did a critique of the painting we did the other week. As we were down in numbers, we only had 3 paintings to discuss but all 3 were so different, you would never imagine we were all working from the same still life. I like that.

Then we were on  to this weeks project, wax resist.  I must admit, my memory of wax resist dates back to doing this at primary school and then later in my first year at Secondary school, doing batik. So I was intrigued but not overwhelmed by the prospect.

She started by doing a demonstration, doing a quick  self-portrait drawing with a wax crayon and then covering it with some watered down Indian ink.

So we went about creating our selfies,( using after 1st 2 stages) with pastel, charcoal and paint. I had brought along a small round bathroom mirror, so I kept on having to bop around to see all of my face. However, I have done enough selfies to know what to expect and to be honest, it probably helped so I didn’t overly focus on one particular feature (none of which I love) Due to the extended time we spend on creating our acrylic skins, we ended up not having a lot of time for this exercise. I might try it again during the week.

My camera has made this much more vivid than it actually is. The reds are too red but the blues are about right. I particularly like effect created by the wax in the hair as that is always one (of many) of my problem areas.  Below is a close up 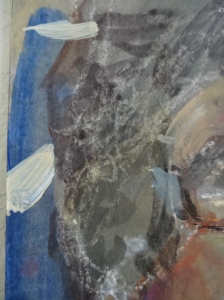 As I said I have always done self portraits and here is one when I was in my first year at college in 1977. It’s still one of my favourites.