Well, for the last 2 days I have actually managed to paint but I still have a ways to go before it become a habit.  This is a quick painting I did this morning on 300g/m fabriano watercolour paper with acrylics.  Capturing the light off the vase was difficult to say the least and most of the time I ended up with very dead colours as my mixing was way off.  In the end I think I ended with an OK start but I would be disappointed if this was prolonged effort as it fails to get the vibrancy of the piece completely 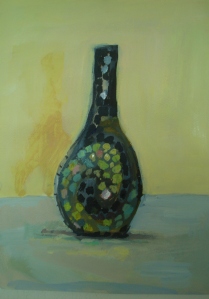 Earlier in the year I completed a sketchbook for the Art House Co-op 2011 Sketch Book project   Again it was something I struggled over as although I use a sketchbook from time to time, it’s not a habit unfortunately.  When I was at Camberwell I would never have been without my sketchbook and even at Bath Academy of Art, I had several on the go.   I like to collect sketchbooks but actually using them seems an uphill struggle and I think it mainly because I am putting too much expectation on them.  To honest, it was probably a mistake to do this project as you get to see other people books and most are finished refined projects which a sketchbook shouldn’t be.  It should be a place to make notes, observation and experimentation.

Anyway, I decided to do the last, experimentation and I ended up with a book that wasn’t pretty but I think quite interesting.  My pages were based on 2 Polaroids my husband had made at work to see the defects on the microchips his company were producing at the time.  I had always been drawn to them as they seemed like another world but also very much part of this world.  At first I stuck too rigidly to the Polaroids but as I went forward they began to have a life of their own. 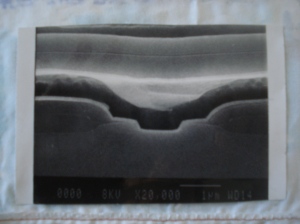 My biggest challenge was the sketchbook which was sent was very flimsy, even a pen bled through to the other side.  I read that you could take out the pages and rebind the book  which is what I did but then I read about the thickness rule. It shouldn’t be more than 1″ think once complete and no outside fasteners.   More problems.  I will write about them tomorrow